Trust in the things you're hoping to find... The award-winning story of The Pozo-Seco Singers and their lead singer Susan Taylor (Pie). 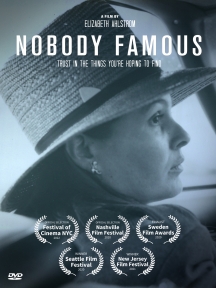 Set against the backdrop of the socially and politically volatile 1960s, Nobody Famous traces the quick rise and steady fall of the 60s folk/pop trio, The Pozo Seco Singers. It is the award-winning story of the threesome and their lead singer Susan Taylor (Pie). The Pozo-Seco Singers were an American folk band that experienced national commercial success during the 1960s. Comprised of Susan Taylor, Don Williams and Lofton Kline, the trio hailed out of Corpus Christi, TX, but once they signed to Columbia Records, their music went national. They are perhaps best known for their 1966 hit "Time" but that was just one moment in their acclaimed history. Susan Taylor was the lead singer. She is best known as Taylor Pie, but with her overly friendly, always smiling, and lighthearted humorous persona she prefers to be simply be called "Pie". When The Pozo-Seco Singers were signed by Columbia Records, they joined a folk force of artists that included Bob Dylan, Simon & Garfunkel, Johnny Cash, Marty Robbins, Barbara Streisand and more. "I felt like I'd made it to the top of the mountain," says Pie reflectively. This film is really about Pie and the folk wind she's traveled on.