Long-awaited rerelease from the most famous Hungarian rock band Omega. The series with re-releases from the Bacillus catalog will continue. 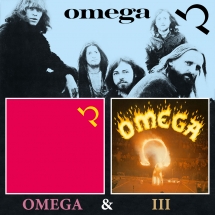 More than 50 million records sold, LP productions in Hungarian, German and English, tours and festival appearances throughout Europe and Japan, at least 50 cover versions or adaptations of the world hit "Gyöngyhajú lány" - Omega are Hungary's number one rock export. In 2022, the band will be celebrating its 60th stage anniversary, making it one of the longest-serving rock formations in the world.

On St. Nicholas Day, December 06, 2021, singer and founding member János Kóbor passed away due to the coronavirus. Now the Omega albums from the well-known and successful Bacillus era will be rereleased originally and completely on CD, vinyl and digitally.

The series with re-releases of Omega from the catalog of the rock label Bacillus will continue.