SEE THE MOST EXCITING ADVENTURE IN A MILLION YEARS! 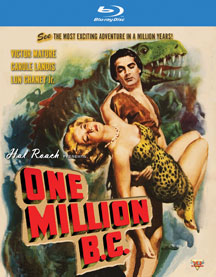 One Million B.C. is a 1940 American historical epic fantasy film produced by Hal Roach Studios and released by United Artists. Boy meets girl - prehistoric style, in this classic of man's battle to survive against the terrors of the prehistoric world. Dinosaurs, savage nature and man and a gigantic erupting volcano are part of the camp adventure classic. Big-chested Victor Mature stars as protagonist Tumak, a young caveman who strives to unite the uncivilized Rock Tribe and the peaceful Shell Tribe, Carole Landis as Loana, daughter of the Shell Tribe chief and Tumak's love interest, and Lon Chaney, Jr. as Tumak's stern father and leader of the Rock Tribe. Chaney's billing differs from that of his home studio Universal Pictures in that Hal Roach elected to retain the "Jr." instead of billing him under his father's name, possibly because Roach was co-directing the film with his own son Hal Roach, Jr. The film was the top grossing movie of 1940 and was nominated for two Academy Awards for its special effects and musical score. (cr. excerpts from Wikipedia)

'...a masterpiece of imaginative fiction ... You are almost certain to like something about 'One Million, B. C.''