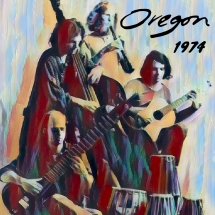 The band's music has always been almost totally acoustic. ''Acoustic instruments sound more expressive to me,'' Towner explained to Jazzwise magazine (UK) in September 1997. He further explained his guitar style: ''With classical guitar [you're] using all the fingers of your right hand to pluck which means you can be sounding anything from two to five notes in exact unison, rather than a strum.'' As well as their core instruments, Towner has played trumpet, synths and piano with the band, McCandless bass clarinet and flute, Moore flute and violin and Walcott clarinet and dulcimer. To name but some. "At one time we were carrying eighty instruments on the road!" McCandless has said.

The combining of instruments from disparate musical traditions and the musicians' range of influences meant that 'jazz' was always an inadequate label for the band. ''Live In Bremen 1974'' documents Oregon at their mesmerizing best. The interplay between the four players is stunning and on each piece mood and texture are ever-changing, yet always following an aesthetic logic that seems irrefutable. ''Live In Bremen 1974'', however, is a reminder of a band that made music that had never been heard before, that had never been imagined before. One track is titled ''Brujo'', Spanish for ''sorcerer.'' Truly, Towner, McCandless, Moore and Walcott were musical sorcerers whose playing retains its power to enchant not only the band's original fans but even, surely, anyone lucky enough to be hearing the band for the very first time.

The nine selections leave no doubt that Oregon's music is among the most adventurous and fascinating in all modern jazz. The consummate performances incorporate Indian and classical music elements and build stunning, seemingly improvisational soundscapes from Paul McCandless's reeds, Glen Moore's bass, Colin Walcott's percussion instruments, and the guitars of Ralph Towner, who wrote all the selections.

One of modern jazz’s most adventurous groups is at the peak of its powers on the two-CD Oregon – 1974, a two-hour concert recording from Bremen, Germany.