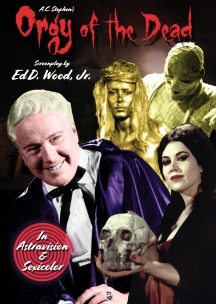 A horror novelist (Bob) and his girlfriend (Shirley) are taking a leisurely drive one evening, in search of an infamous graveyard that will inspiration for his next novel, which ends when Bob loses control and drives over a cliff....and then it gets really weird. Bob and Shirley awaken in the midst of a series of bizarre rituals conducted by The Emperror (Criswell) and his faithful servants including nude dancers, a werewolf and a mummy. Throw in some sado-masochism, snakes, skeletons and more naked women and you have the entire plot. Written by the venerable Ed D. Wood Jr.(Plan 9 From Outer Space, Glen or Glenda and numerous other "D" grade films), directed by cult movie maverick Stephen C. Apostolof, working under the pseudonym A.C. Stephen (Fugitive Girls, Hot Ice, Beach Bunnies, Lady Godiva Rides) and with uncredited stints by Ed D. Wood Jr. and Ted V. Mikels as Assistant Directors, "Orgy of the Dead" is a thoroughly campy, marginally sexy, and thoroughly outrageous gem starring the Amazing Criswell (Plan 9 From Outer Space, Criswell Predicts, his eponymous TV show that ran for 10 years on KLAC), Pat Barrington (Shirley/Gold Girl) and Lorali Hart (Cat Dance) The production budget was estimated at $30,000, made possible because Wood served as writer, production manager, casting agent, and even held up cue cards on this low-budget film, although he did not direct.. Released June 1, 1965

Wood's priceless dialog is more than worth the price of admission.

...plays more like a night at a burlesque show, with Wood scripting a vague horror story to help link together performances from ten dancing women...