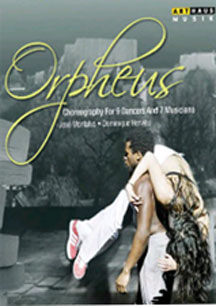 The myth surrounding the Thracian king's son Orpheus has provided artistic inspiration for numerous composers, painters and directors over the centuries. As a rule, the plots tend to focus on Orpheus' grief following the death of his wife Eurydice and his attempts to retrieve her from the underworld. The choreographers Dominique Hervieu and José Montalvo, generally known for their work in purely musical contexts, instead place Orpheus at the centre of the story as an artist who charms gods and mortals alike with wit and song - even moving rocks to tears. "Orphée" tells the story of Orpheus and Eurydice as a modern heroic epic: It's fast, exhilarating, and full of surprises. Nine dancers and seven singers and instrumentalists dance to the sound of bush drums in front of a lavishly-designed backdrop befitting a royal son. Classical singing merges with pop music. Hip-hop and break-dance meet orchestral music. Hervieu's and Montalvo's "Orphée" is a captivating work that fans of modern dance theatre will simply adore.