I warned you not to bowl tonight! 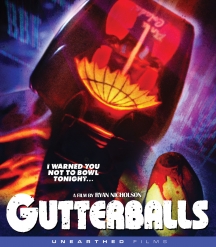 A brutally sadistic rape leads to a series of bizarre gory murders during a midnight disco bowl-a-rama at a popular bowling alley. One by one, players of two teams meet blood-drenched gruesome deaths at the hand of a black bowling-gloved masked killer. This alley runs red with blood by sunrise.

Delivers on everything it promises: old-school slasher thrills loaded with gore and nudity set in a kitschy '80s bowling alley.