THE FBI DECLARED THEM PUBLIC ENEMY NUMBER ONE. THE PEOPLE CALLED THE HEROES. 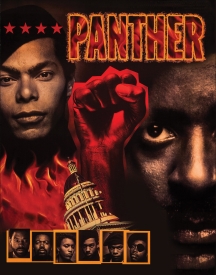 A time of tension. Of rioting in the streets. A time of change. In Oakland, California, 1968, The Black Panthers led by Huey Newton (Marcus Chong, The Matrix) and Bobby Seale (Courtney B. Vance, The Preacher's Wife) have armed themselves and are ready to fight for freedom. To the people, they're heroes, but to the FBI they're Public Enemy Number One. Now the Feds will do everything they san - on the right or wrong side of the law - to bring them down.

'Panther' does a good job of capturing the idealism and excitement of the party's early days... a vivid period reconstruction of the way the Panthers grew both through community programs... It makes a compelling story.

The most compelling part of 'Panther' is a sincere attempt at celebratory, spirit-raising filmmaking in the 'Malcolm X' mold, a romanticized but effective attempt at creating heroes & showcasing the positive aspects of the Panther Party & its message...