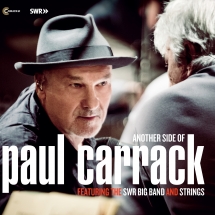 Recorded ''LIVE'' at the 'state of the art' SWR TV studios in Stuttgart, Germany and filmed with multiple cameras, the performance was broadcast nationally on mainstream TV in Germany attracting rave reviews.

The repertoire, which showcases 'Another Side' to Paul Carrack's incredible musical versatility as he adapts effortlessly to yet another genre of music, includes some classic swing songs, Carrack's own compositions (including How Long) songs from Ray Charles & Nick Lowe and an intimate version of The Living Years.

A must have for your Paul Carrack Collection.