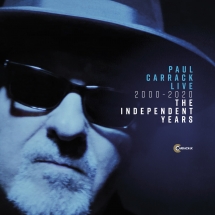 These recordings that celebrate those 20 years are aptly called The Independent Years. They are a collection of rare and unreleased recordings from live concerts and TV shows and demonstrate what it takes to be a successful musician and songwriter.

Real talent is much rarer than people imagine. And in Paul Carrack that talent is here to be heard in all its raw emotion. Each Paul Carrack show is different, he sings how he feels, with the ability to channel those emotions to his many fans.

Paul wrote and sang ''How Long'', the much-covered 1974 classic from his days with Ace, and was the voice of ''Tempted'', from his tenure with Squeeze. Then came such hits with Mike + the Mechanics as the Grammy-Nominated ''The Living Years'' and ''Over My Shoulder'', the latter a co-write with Mike Rutherford. Not to mention that another co-write, ''Love Will Keep Us Alive'', was covered by the Eagles and won a hugely prestigious ASCAP award as Song of the Year.

Diana Ross, no less, covered Carrack's co-write with Nick Lowe, ''Battlefield'', and as an in-demand collaborator, Paul's decades of distinction include sessions with The Smiths, Roxy Music, B.B. King and countless others, culminating in a request from Eric Clapton to join his touring band. That rare honor happened in the summer of 2018 with their homecoming performance in London's Hyde Park.