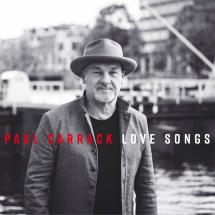 Previously only ever available on download / streaming sites, ''Love Songs'' is released physically for the first time as a 38 track 2 CD set with booklet. The set aims to compile Paul's fans favorite love songs into one concise collection.

Not only is this a compilation of tracks from Carrack's many solo albums going back as far as 1996, but it's also a metacompilation: the two discs in this package were previously released separately as Love Songs Volume 1 and Volume 2. Some of Carrack's biggest hits were recorded before his solo career had really taken off, when he was a member of Squeeze ('Tempted') and Mike and the Mechanics ('Living Years'), and none of those are included here, but this collection demonstrates that if you've been sleeping on Carrack as a solo artist you've really been missing out. Most of the songs are originals (quite a few cowritten with his old Squeeze bandmate Chris Difford), but there are some well-chosen covers as well: songs by Burt Bacharach ('Any Day Now,' 'Walk on By'), Bruce Springsteen ('If I Should Fall Behind'), and Allen Toussaint ('Tell Somebody Who Cares'), among others. His forays into American Songbook standards like 'All the Way' and 'Moon River' are less satisfying, because they require him to step out of his natural vocal style, which is simmering blue-eyed soulfulness. But there are really no weak tracks here; everything on this collection showcases one of the great soul-pop voices of his generation and an exceptionally gifted songwriter.