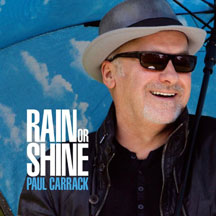 With 10 tracks that include five new songs and classic covers of Ray Charles "Hard Times" and Luther Ingram's slow burning soul masterpiece "If Loving You Is Wrong (I Don't Wanna Be Right)" Paul has again come up with an astonishing new album. Rain or Shine is a mixture of original songs and covers which all in all is a collection of songs delivered as only Paul Carrack knows how - with SOUL! Prior to the album release, Paul will be releasing the lead off track entitled "That's All That Matters To Me" that has already gained numerous plays on BBC Radio 2. One of the hardest working figures in modern music, Paul Carrack is celebrating over five decades in the music business. Paul has recently toured the US, the UK and Europe as a member of Eric Clapton's Band The former vocalist of Mike and The Mechanics and the voice behind world-wide hits such as 'How Long' by Ace, Squeeze's 'Tempted' and, of course, the timeless classic 'The Living Years' Carrack is now firmly established as a solo performer. Initially finding fame with Ace where he wrote and sang the classic "How Long". He has gone on to enjoy a successful career that spans 40 years, including guest appearances on over 60 albums, as well as writing for The Eagles, Diana Ross, Tom Jones, Michael McDonald and Jools Holland among others. Over the past decade or so Paul has worked increasingly in his own right on many solo albums; Satisfy My Soul (2000), Groovin' (2001), It Ain't Over (2003), Winter Wonderland (2005), Old, New, Borrowed and Blue (2007), I Know That Name (2008), A Different Hat with the Royal Philharmonic Orchestra (2010) and the current album Good Feeling which came out in September 2012. And last year BBC4 screened The Man With The Golden Voice - a programme that documented Paul's emergence from his Sheffield upbringing to the star he is today!

The latest in a long line of high standard pieces of work from one of our finest singer/songwriters. Care and attention are lavished throughout.

I'm not sure Carrack has ever sung better, even during his hitmaking years with Mike and the Mechanics, even if the follow up to Good Feeling took just a matter of months.

—Nick Deriso, Something Else

Rain or Shine is pure gold.