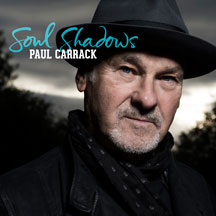 Soul Shadows comes in the wake of Carrack's latest sojourn as featured vocalist and keyboard player in Eric Clapton's band for his UK and international tour, the result of their longtime friendship and mutual respect. The new album is the follow-up to 2013's warmly-received Rain Or Shine, which maintained Paul's recurring status as a staple of the BBC Radio 2 playlist. But where that album contained a mixture of covers and originals, the new set is comprised almost entirely of some of the best songwriting of Carrack's entire career, plus one lovingly-chosen remake: the Bobby 'Blue' Bland gem that was also a major R&B hit for Aretha Franklin, 'Share Your Love With Me.'