Paul Corfield Godfrey - Feanor: Epic Scenes From The Silmarillion After The Mythology Of J R R Tolkien Part One

The completion in 1996 of the "epic scenes from The Silmarillion", a four-part cycle drawn from the posthumous writings of J R R Tolkien 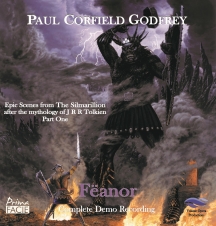 The completion in 1996 of the "epic scenes from The Silmarillion", a four-part cycle drawn from the posthumous writings of J R R Tolkien, constituted the largest-scale work of classical music written in Wales in the twentieth century. With this landmark release of Feanor, following on from their earlier successful issues of Beren and Luthien, The Children of Hurin and The Fall of Gondolin, Prima Facie in collaboration with Volante Opera Productions now completes the recording of that original cycle; and a further episode, The War of Wrath, written in 2019-21, is to follow in due course. All of these works employ a variety of posthumously published texts by the author with the permission of the Tolkien Estate. As before, the singers are all professional artists from Welsh National Opera; the booklet explains the methods of production in greater detail, and also includes an essay by the composer on the manner in which the author's text has been adapted for music. The late Brian Wilson, reviewing The Children of Hurin for MusicWeb International, drew comparisons between the "genuinely epic" music of the cycle and that of Sibelius, Hildegard of Bingen, Vaughan Williams, Holst and Wagner: "It's a very different ending from that of Gotterdämmerung, but it's worthy of mention in the same sentence - and there's not much that is, in my book."