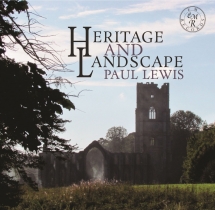 Though probably best known for his scores for over 150 TV productions of all kinds, Paul Lewis, a self-confessed composer of place, has for many decades been singing the praises of his beloved native landscape and its historical heritage in music commissioned by background music libraries that supply music to radio, TV and film studios worldwide. 'Heritage and Landscape' is a collection of such music, composed mainly in the 1970s and 80s and recorded with various orchestras - from the Philharmonia to the Paris Studio Symphony Orchestra - under Lewis's baton. Among such impressionistic suites as 'English Country Pictures' and 'Sussex Variations' are the sparkling 'Festival of London March', 'Battle Over Britain' (a miniature-tone poem commemorating the Battle of Britain) and the original recording of 'An English Overture', Westward Television's iconic station opening music, composed in 1971 and broadcast daily by the station until they lost their franchise nine years later. The recordings have all been remastered and sound beautifully fresh.