Documentary film tracing the history of the 1960s UK counter-culture scene and its impact on The Beatles. 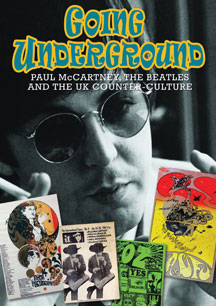 In the mid-1960s the often rigid and colourless British way of life was irrevocably transformed by the emergence of a cultural underground movement. Led by a loose collective of young radicals, they introduced new social, sexual and aesthetic perspectives. Operating out of the heart of London, their various activities, from 'The International Times' - a bi-weekly journal that no hipster could be seen without - to the psychedelic nightclub UFO, promoted alternative lifestyles and values, and sparked a social revolution. This film not only traces the history of this underground scene, but also explores its impact on the pre-eminent British group of the era, The Beatles. Although they were well established by the time the movement emerged, Paul McCartney in particular, was closely linked with several of its key players, and through his exposure to cutting edge concepts brought ideas directly from the avant-garde into the mainstream. Featuring many new interviews with key players from the time including; IT editor and long term friend of Paul McCartney, Barry Miles; founder of IT and UFO club organiser, John 'Hoppy' Hopkins; founder of UFO and Pink Floyd producer , Joe Boyd; Soft Machine drummer, Robert Wyatt; drummer from experimental improvisational collective AMM, Eddie Prevost; proprietor of Indica, the counter-cultural gallery, John Dunbar; Underground scenester, vocalist with The Deviants and IT journalist, Mick Farren; plus author of 'Days in the Life: Voices from the English Underground 1961 - 1971', Jonathon Greene; Beatles expert, Chris Ingham and Mojo jounalist Mark Paytress. Also includes rare archive footage, photographs from private collections and music from The Pink Floyd, The Beatles, Soft Machine, AMM and others.