The challenge is not making money, it's keeping it! 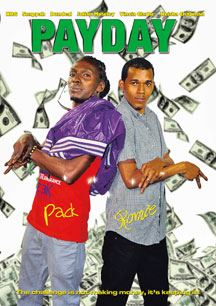 Payday, a Barbadian comedy-drama/buddy film showcasing a raw slice of Barbadian community life. Romie, an aspiring mechanic and ladies man, with his brutally honest best friend Pack, invest their entire salaries in a down-payment on a garage. Their goal: to establish a successful mechanic's shop to get away from their boring jobs as security guards, their loving yet eccentric and demanding families, and poor standard of living in their village - Pickletons. Their simple task of making the down-payment to the garage owner at the village lime that night is hilariously complicated by Romie's love-life, and Pack's love for cannabis. The complications and laughs multiply as the best friends go to extremes to avoid violent drug men, a charity collector, crazy ex-girlfriends and other wacky villagers.