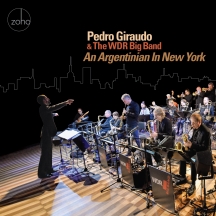 An Argentinian in New York is ultimately about a man, a maestro's search for meaning in his adopted home. Hailing from Córdoba, Argentina, Pedro Giraudo is a celebrated and virtuoso bassist, bandleader, composer, and arranger who is a veritable creative genius. His musical career reads like an all-star lineup, as he's performed or recorded with the likes of Ruben Blades, Paquito D'Rivera, Pablo Ziegler, Regina Carter, Branford Marsalis, among others. His discography as a band leader is equally as impressive, having released five albums that are all critically acclaimed. On the ZOHO label, they include "Cordoba" (ZM 201106, Downbeat **** 4 stars), "Cuentos" (ZM 201503, Downbeat *** 4 stars), and the classic Tango Quartet album "Vigor Tanguero" (ZM 201803), simultaneously released with "An Argentinian in New York". On this album, Giraudo observes, describes, and explains New York through a colorful and multi-hued musical prism. For those new to the Big Apple, as well as lifelong residents, you will hear something new, fresh, even provocative in these seminal pieces. That's because Giraudo imbues his music with both personal and profound meditations on the meaning of home. He realizes and furthers the notion that blending is beautiful, mixing is magnificent. Indeed, this album could have very well been titled "Melting Pot." It invokes that vivid American metaphor, as Giraudo explores his native Argentina (for example, "Chicharrita" an homage to tango master Osvaldo Pugliese) with subtle references, juxtaposing it with the musical modernity of American urban living. For instance, "Eir" draws attention to the struggle of women not just in the jazz world but across most sectors and industries. Giraudo has something to say. This production is a personal testimony on the challenges and opportunities of our time. Six of Giraudo's brilliant compositions are brought to life with the spectacular performance of the WDR Big Band. Kabir Sehgal, producer