In his debut as a leader, drummer Phil Stewart reworks a program of rare bop gems with remarkable flair. 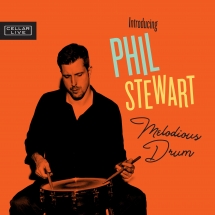 This album introduces an astute percussionist in the line of Max Roach, Art Taylor, Philly Joe Jones and Louis Hayes . . . PHIL STEWART. This is his professional recorded debut, but anyone paying attention here locks into the explicit grooves delineated across this disc - sharp and beguiling, more seductive than admonitory - that carve understated trenches, each inviting welcome. Stewart is the sort of leader who goads and teases, His beckoning rhythmic clarity shines an unobtrusive laser somewhere "out beyond." That's a good trick. Vernel Fournier made a career of such prescient stealth in his time with Ahmad Jamal. So did Jo Jones with Basie and Ed Thigpen with Oscar Peterson. Those with this album nearby probably know Phil's brother Grant, one of the most lyrical, flat out joyful tenor saxophonists on the scene. I regard Grant as one of the three or four essential players on his instrument at present. On Bud Powell's "Dance of the Infidels," Grant takes the first sax solo. On George Coleman's "Apache," a revision of the classic blowing vehicle, "Cherokee," Grant lets loose. His noir peek-a-boo swagger on Josh Benko's "The Sumo" brings out a previously suppressed Charlie Rouse vibe from Grant's willing Monkishness. Gordon Jenkin's chestnut, "This Is All I Ask," reveals amor's compelling amoroso. Joe Magnarelli's trumpet virtuosity brings rare octane to the feel underway: a horn that carries its own message while, without derivation, invoking steadfast others . . . in this instance, Booker Little, Stu Williamson and Kenny Wheeler. Notice, too, Chris Byars' sax along with Grant on "Infidels" and "Apache." More to the point, Byars digs in with serious ferocity on his own tune, "The Doctor Is In" as well as on Sacha Perry's jaunty recollection of Minton's jam scene, "Erratic." Play this album. Then punch up the concluding blues, "Livin' With Hobson," once more.