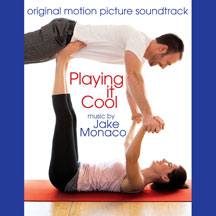 Anyone good in it? Uh, yuh. Chris Evans is on screen essentially the entire time which was rather nice. Elsewhere there's Michelle Monaghan as 'Her' and Parks and Recreation's Aubrey Plaza. Oh, and Ashley Tisdale and Glee's Matthew Morrison pop up at various points throughout too.

Monaco can write great romantic themes, of that there's no question and it's those parts I cherish most from this score.