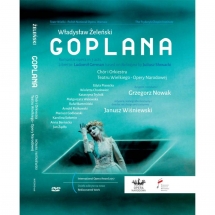 Based on 'Balladyna' by Juliusz Slowacki, Goplana is a romantic opera in three acts, and this is its premiere recording. The production was awarded the International Opera Award in the Rediscovered Work category.

Zelenski noticed a wealth of meanings in Balladyna, its multiple threads and interpretation prospects, so drew upon it and composed one of the most important Polish operas.

Goplana - like Balladyna - is a cruel fairy tale unfolding in the world of folk tales and legends, where human fate is freely intertwined with the actions of other beings. This is a story about murder and its consequences, a struggle for power and a struggle with one's own conscience.

Bringing Goplana to the stage after an absence of almost seventy years, the production restores an unjustly forgotten opera to the collective awareness, an opera highly appreciated by Zelenski's contemporaries and unquestionably belonging among the best works of Polish music literature.

This premiere recording reinstates it to its rightful place in the repertoire of the Polish National Opera.

Leading creative personalities from the world of staging and music: Janusz Wisniewski (whose 'Mannequins' and 'Seven Deadly Sins' were received enthusiastically by Warsaw opera audiences, and whose 'Ubu Rex' won special recognition from Krzysztof Penderecki), and Grzegorz Nowak, a maestro of international fame, valued greatly also for his interpretation of Polish music.

The soloists are the elite of Polish singers and invite the listener/viewer to step into the circle of a dark legend that stirs the imagination and is a lasting part of Poland's cultural space."