The future of metal is PREDATOR and Born In Blood is a masterpiece. 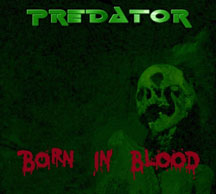 Born In Blood is Predator's second album. Recorded in only 24 hours, it captures Predator in even finer moments than their debut. Without a trace of doubt, this is the only band that can rival Metallica for the throne of metal greatness and win it! The album sizzles with amazing metal gems certain to satiate metal heads all over the world. Opening with "Days Without Rain," this new album is relentless with power, might, and amazing musical creativity that echoes in one's head longer after the first listen. The future of metal is PREDATOR and Born In Blood is a masterpiece.