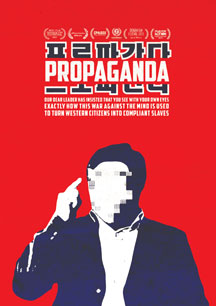 Controversial to its core, this hard-hitting anti-Western propaganda film, which looks at the influence of American culture on the rest of the world from a North Korean perspective, has been called "Genius!" by Michael Moore, and has been described as 'either a damning indictment of 21st Century culture or the best piece of propaganda in a generation.' As first reported on mainstream new around the world, Propaganda is allegedly a video smuggled out of North Korea. Brilliantly using this 'fake North Korean propaganda' found-footage device, Slavko Martinov first parodies its language and stylings, before targeting the mountain of hypocrisies and contradictions that make up the modern Western world. In doing so, Propaganda delivers a devastating blow to those who might be quick to laugh at 'backward' ideologies before considering how 21st century political and cultural trends have hurt the moral high ground of the rest of the world.

A game changing film. Triumph of the Will meets Blair Witch Project.

The movie's claim of being a piece of real propaganda smuggled from North Korea exceeded its desired effect.

One of the Top Docs to Watch... a must see film.

One of the Top 20 Social Change Documentaries

Even better than Clint Eastwood with his empty chair. Worth watching...

It's reception was positively Catfish-esque.

A Masterpiece...the best piece of propaganda in a generation.

A surreal and twisted masterpiece.