THIS WOMAN HAS JUST CUT, CHOPPED, BROKEN AND BURNED FOUR MEN BEYOND RECOGNITION... BUT NO JURY WOULD EVER CONVICT HER! 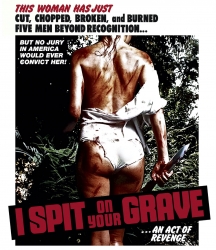 Camille Keaton (What Have You Done to Solange?, Tragic Ceremony) stars as Jennifer Hills, a young and beautiful career woman who rents a backwoods cabin to write her first novel. Attacked by a group of local lowlifes and left for dead, she devises a horrific plan to inflict revenge in some of the most unforgettable scenes ever shot on film.

In 1978, one film changed the face of cinema forever. Now, four decades later, the original and notorious I SPIT ON YOUR GRAVE (aka 'Day of the Woman') is back and still refusing to be buried! In this new special edition Blu-ray, you can re-experience the phenomenon that shocked and divided the world - and influenced an entire genre and generation of filmmakers - with a new 4K HD scan and restoration of director Meir Zarchi's 35mm original camera negative and a newly restored original mono soundtrack. Also loaded with a new location featurette hosted by writer Michael Gingold, an audio commentary with writer / director Meir Zarchi and more, this blu-ray is a must own for cinephiles around the world.

It's about the strongest 'Take Back the Night' statement ever made. She doesn't just take back the night. She takes back the night, the morning, the afternoon, and steals the clock while she's at it.

Named as one of the most ridiculously violent films in history.

A vile bag of garbage without a shred of artistic distinction. Attending it was one of the most depressing experiences of my life.

I spit on Your Grave boasts solid technical merits and good supplements. Recommended

Ronin Flix has done a remarkable job on their restoration of the film for fans of the picture? the film is effective ? if brutally effective. It is damn hard to watch, but the final act of the film is certainly rewarding? I can highly recommend purchasing this release if you are a fan of this film. Ronin Flix have done an amazing job on the video transfer and the array of supplements.

This edition boasts solid technical merits and good supplements. With content caveats duly noted, for the strong of heart if not for the public at large, I Spit on Your Grave comes Recommended.

But somehow, I’ve never seen it. Maybe the giant clamshell with the handwritten must be 18 to rent note frightened me. I mean, I was certainly aware of it, but while most slashers allowed enough voyeuristic fun for teenagers in my small hometown, I Spit On Your Grave just seemed like a bummer trip. And yeah, it is, but I’m glad I’ve finally watched it.

I Spit on Your Grave arrives on region-free Blu-ray from Ronin Flix in 1080p HD framed in 1.85:1 widescreen and benefits from a gorgeous 4K scan and restoration from director Meir Zarchi's 35mm original camera negative.

Ronin Flix has gone out of their way to make this version the best there ever was beginning with a 4K HD scan & restoration of director Meir Zarchi's 35mm original camera negative.