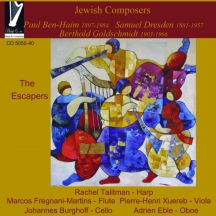 This new release is focused on three exceptionally talented composers whose careers were interrupted by the Nazis and yet succeeded in escaping and each becoming important, as well as innovative, creators of music.

Paul Ben-Haim was an eminent German-born Israeli composer and teacher, leader of the Eastern Mediterranean school, synthesized Eastern and Western approaches to music in compositions of exceptionally fine craftsmanship. He was the leader of a group of Palestinian musicians, many of them European emigres, who developed a fusion of Eastern and Western musical traditions. Isolated during World War II, this group, many of whom had been thoroughly trained in European conservatories and academies of music, studied the music of the Middle East and came to incorporate its melodic and rhythmic character into the forms of Western music. After the Nazi reign and his return to Dresden, Samuel Dresden emerged as the country's leading twentieth-century composer of oratorios and festive choral music. Finally, Berthold Goldschmidt was a rising superstar in Germany, his move to England certainly ensured his survival and opened up many opportunities. However, he toiled as a composer, mostly in obscurity, for decades after his emigration. By the late 1950's he had stopped composing entirely, devoting himself instead to conducting, where he played a vital role in Mahler's ascendancy in Great Britain. Then around the age of 80, with the growing interest in ''Entartete Musik'' he had a kind of fourth career, as an increasingly venerated (and productive) figure, composing once again until his death at 93.