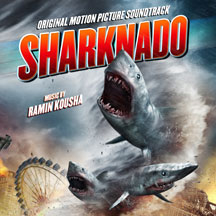 Every so often, something comes along that puts a skip in your step, makes your heart flutter, and sets your imagination ablaze with possibility.... If you're really lucky... it'll be a swirling mass of bloodthirsty sharks.

Original Score: 4/5 Sharknado is an hour and a half of your life that you'll never get back. And you won't want to.

I love it when a score actually surprises me. It helped that I didn't have any expectations from this one, but what I heard made me forget completely about the movie it was written for. I found a smart, engaging, deep action score...