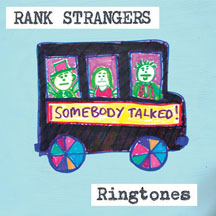 Rank Strangers are an indie garage rock trio from Minneapolis, established in 1990. Named after a classic old bluegrass gospel song, but influenced by punk-inflected indie rockers like Guided By Voices and Grant Hart, singer / songwriter Mike Wisti describes "Ringtones" as having "post-illiterate, crypto-phonic songs that unconnect the dots and utilize the element of surprise". As proprietor of Albatross Recording, Wisti has recorded over 300 records in the past 20 years by such luminaries as Lifter Puller, Brute Heart, Grant Hart, Lucy Michelle and Black Diet. He's also the subject of on-going film project known as "The Making of My Genius: The Movie". On Ringtones, the prolific Strangers once again whip up buzzy, lo-fi songs that bristle with slanted, off-kilter energy... Always sounding serious, but always having fun.

Rank Strangers are just further proof that the City of Lakes can still pull its weight musically... Overall, this is another impressive outing from the band.