The haunting theme song Walking in the Air is recognisable the world over. 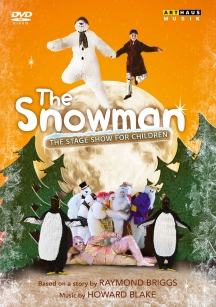 A delightful entertainment for the whole family. When a young boy builds a snowman in his garden, little does he know what is in store for him. The magic of Christmas brings his snowman to life and together they embark on an adventure, discovering the wonders of each other's worlds. Childhood fantasies come to life: flying with a secret friend around the world.The charm of Raymond Briggs's original illustrated book inspired the composer and lyricist Howard Blake to write a score telling the lovely story of The Snowman in music. Blake's enchanting song Walking in the Air" became an immediate hit and remains an international favorite. Following the success of book and film, The Snowman has gone on to conquer the stage with dance and mime.Howard Blake's catchy music lets us feel the wonder, excitement and fun of it all.Raymond Briggs' children's story is adapted for the stage, with music composed and conducted by Howard Blake. After building a snowman in his garden, a young boy is taken on a series of magical adventures. A filmed stage production of the animated Raymond Briggs story. Movement, dance, mime and special effects at Birmingham's Repertory Theatre recreate the story of a friendship between a boy and a snowman.