Some of the material is risqué and close-to-the-edge for its time, as was his style 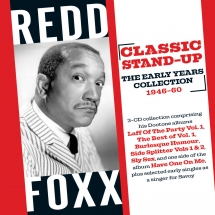 Redd Foxx, real name John Elroy Sanford, became well-known in the USA as a stand-up comedian during the 1950s, developing a raunchy night-club act on the east coast and finding fame when Dinah Washington invited him to perform in Las Vegas. He was seen, and signed, by Dootsie Williams of Dootone Records, for whom he released a string of highly-successful 'live' albums. He later had a successful TV career, starring in the situation comedy "Sanford & Son", with overt racial humour that helped redefine the genre of black situation comedy. This 3-CD collection of selected live recordings from his early years with Dootone features the entire "Laff Of The Party Vol. 1" album, a number of tracks from his "Best Of" album culled from other "Laff Of The Party" volumes, plus the complete "Burlesque Humour", "Side Splitter Vols 1 & 2" and "Sly Sex" albums, along with one side of the album "Have One On Me". Also included are a couple of his early singles for Savoy when he was a jump blues singer. As the comedy albums were all 'live' recordings, most of them comprise complete continuous sides of LPs, with no separate tracks. Some of the material is risqué and close-to-the-edge for its time, as was his style. It's a collection which offers a window on a strand of humour which is maybe not widely known, but has a substantial following among aficionados.