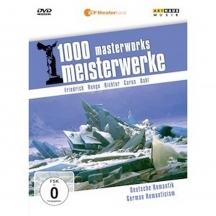 1000 Masterpieces from the Great Museums of the World” is one of the most successful TV series about art. The original, with improved image quality, takes us on a fascinating journey through the history of art. Comprehensively illustrated and compellingly presented – the well-known authors of five short art surveys provide a deeper insight into the masterpieces of painting.In the late 18th century, in the wake of the rationalism of the Enlightenment and the sober clarity of Classicism, there arose a yearning for sensuality, the irrational and the fantastic. Romanticism” emerged and took hold of art as well as literature, music and philosophy. In Germany, painters such as Friedrich, Richter, Dahl, Carus and Runge captured the new spirit of the times in their moving paintings.Caspar David Friedrich: The sea of ice (1823 – 24), Philipp Otto Runge: Hülsenbeck´s children (1805 – 06), Adrian Ludwig Richter: Crossing the Elbe at the Schreckstein near Aussig (1837), Carl Gustav Carus: Oak trees by the sea (1835), Johan Christian Clausen Dahl: View of Dresden under a full moon (1839)