The Residents - Marching To The See

The Residents live in Amsterdam for the 2013 WONDER OF WEIRD tour. 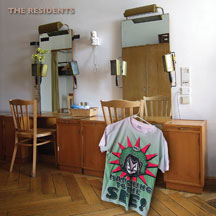 Holding up the underground since 1972, The Residents celebrate four decades of unbridled creativity with "The Wonder of Weird," their 40th anniversary tour. This album, "Marching to the See," collects the musical highlights from that tour. Having recently come out as Randy, Chuck and Bob after years of anonymity, the group now presents itself in concert as the ultimate offbeat power trio, pared down to guitar, keyboards and vocals. Shrugging its collective shoulders, the band re-interprets and devours its classic material like a hungry horse inhaling hay, while still stumbling along at full speed. Sex, shrugs and anti-rock'n roll - it's all there in The Residents' "Marching to the See."