Robert Mugge's loving survey of the diverse musical styles and genres of the State of Louisiana. 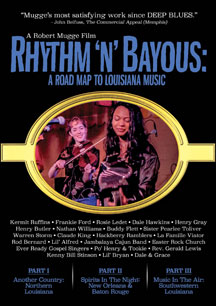 "To describe the recent films of the documentarian Robert Mugge as cultural reference books doesn't mean to imply that these explorations of the musical byways of Southern rural America are lacking in pungent musical sap. It's the careful balance between music and scholarship that lends Mr. Mugge's films a foundation of academic seriousness that flirts with dryness without becoming mired in trivia. Documents of a flourishing below-the-radar culture, often involving musicians who won't be around much longer, they are archival records as well as entertainments. For every obscure blues or folk musician shown performing in his films, there is usually an expert standing by to explain where this artist or group stands on the family tree of American vernacular music. Instead of concentrating on the trunk and larger branches, Mr. Mugge likes to examine the smaller branches and even the twigs. "In his new film, RHYTHM 'N' BAYOUS, Mr. Mugge returns to the South (this time to Louisiana) to compile a singing dictionary of the state's roots music styles and assorted hybrids, from the blues to 'swamp pop' to the fusion of Cajun, Creole and rock 'n' roll known as zydeco. Part musical travelogue, part anthology, part archival document, RHYTHM 'N' BAYOUS is a rambling journey loosely divided into four sections. Begun as the official chronicle of a Rock and Roll Hall of Fame bus tour...it turns into a more informal, out-of-the-way journey to blues and zydeco clubs, gospel churches and radio stations, and musical family gatherings in backwater bayous. A number of the performances are as rough-hewn as the tiny clubs in which they are filmed. But RHYTHM 'N' BAYOUS is finally not about being polished. It's about the organic process by which a culture expresses itself though music and the hybrids that evolve naturally when these cultures begin to mingle. That, after all, is how rock 'n' roll was born." - Stephen Holden, The New York Times

Named one of RECORD COLLECTOR's Best of 2016»

RHYTHM 'N' BAYOUS is a joyful celebration of Louisiana music in all its permutations, a guided tour by experts illustrated with generous helpings of the real thing. Expertly filmed, exuberant performances. Wonderful performers.

RHYTHM 'N' BAYOUS...may be Mugge's most satisfying work since DEEP BLUES. [It] suggests that Louisiana music - and, by extension, the traditional music of the South - is as vital as ever.

An entertaining portrait of the music scene in Louisiana and a valuable addition to an ouevre that has become the cinematic equivalent of the work of important musicologists like Alan Lomax. Wonderful musicians.

A light, entertaining musical travelogue down the highways and byways of the Pelican State. The sheer breadth of Louisiana's musical heritage...ensures that there's something for just about everyone to enjoy. Take heart and dig right in.

What really makes this documentary work is the way Mugge's subjects reveal their motivations for creating or producing music. There are several...performances that are so live, you might just feel like you need to jump up and applaud.