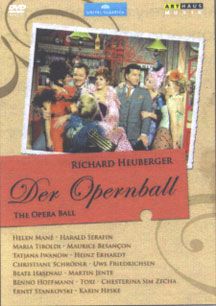 Richard Heuberger (1850-1914) came from a wealthy, art-loving Graz (Austria-Hungary) family. After working as an engineer, he decided to devote himself completely to music, working as choral director of the Vienna Singakademie, composer of instrumental music, ballets, cantatas and operas, music critic and music journalist. Shortly before the turn of the century, he tried his luck with operettas. Only his first work, the delicately orchestrated, splendidly hued "Opernball" (Opera Ball ) of 1898 - a beautiful and substantial echo of the Strauss era - has managed to maintain its position in the repertoire. In this work, Heuberger tried to create a new operetta style, the "comedy operetta". He eschewed spectacular costumes and choruses, sentimentality and drama by picking up where Offenbach had left off in "La vie parisienne" and Strauss in "Die Fledermaus". According to the great Viennese music critic Eduard Hanslick, he succeeded in "preserving the purity of the Viennese operetta. The "Opernball" was a popular, witty piece and Heuberger accordingly avoided the effects of grand opera, both noisy passion andatered-down sentimentality."