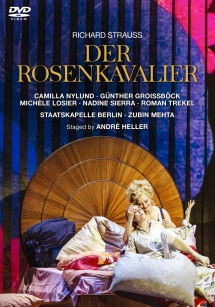 The Viennese aristocracy are no strangers to family feuds: boorish Baron Ochs auf Lerchenau interrupts the morning tête-à-tête between his cousin, the Marschallin, and her young lover Octavian, to ask for her help with his wedding plans, which are steered more by financial gain than love. Ochs does not suspect that Octavian himself, who is chosen to deliver the engagement rose, will eventually fall in love with the bride.