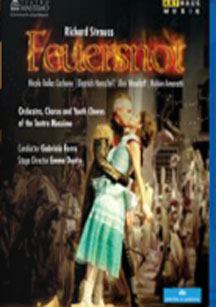 „Feuersnot“ is Richard Strauss’s second opera and made up for the failure of his first when its 1902 Dresden premiere was a resounding success. It is a lively one-act drama about the ancient Bavarian tradition of celebrating midsummer night with bonfires, songs and dances at the summer solstice – a work full of allusions. The score has quotations from Wagner and echoes of contemporary composers such as Mahler and Bruckner. Nonetheless, it is genuine Strauss – from racy waltzes to enchanting love duets; Conductor Gabriele Ferro acquits himself well in handling the complex score and keeping the balance between the pit and the crowded stage – the orchestra sounds marvellous. “Nicola Beller Carbone triumphs magnificently in the role of Diemut” (Forum Opéra) and Dietrich Henschel, in the role of her suitor Kunrad, sings a “full-voiced baritone” (Tagesspiegel).