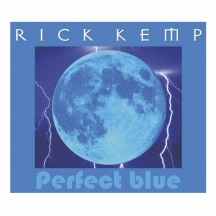 This detracts from the fact that as side projects and away from Steeleye he's also played with Jethro Tull, King Crimson, Michael Chapman, The Maddy Prior Band, The Backroom Boys (Gerry Conway, Jerry Donahue, Doug Morter), the rocky Ceilidh band Whapweasal, Devil's Watch and, more recently, BN&K (Paul Burgess of 10CC, Ken Nicol ex-Steeleye and Rick) as well as sessioning on and producing albums from The Johnstons to Swan Arcade. Being remembered as the bass player also obscures the fact that he's a very accomplished guitarist. Rick Kemp has a long list of songs he has composed some specifically for Steeleye like the recent Cromwell's Skull and others which have been picked up by other people. His most famous songs are Deep In The Darkest Night - covered by The Eurythmics with Maddy Prior and Somewhere Along The Road - covered by Cathie Ryan, Emily Smith and a host of others. Since turning his hand to solo gigs these two songs appear on the new album. Both of the previous albums were in a band setting whereas this new one sees Rick mainly on his own with his guitar. Of course he has added some bass to some tracks, but has dubbed on all the harmonies himself. All the songs except one are Rick's: some very new and some which have been fermenting for years. The one exception is one written and performed here by Rick's daughter, Theresa Kemp, Stars. For this Rick takes a back seat, but Theresa joins him on Somewhere Along The Road which they sing together. There is a sprinkling of embellishments along the way with Rick renewing acquaintances with Doug Morter on Stars, Ian Kellett on Stars and Somewhere Along The Road, Richard Adams providing drums on Lowland Sky, Linda Adams on Long Time Ago and a local community choir on Somewhere Along the Road. This all adds up to a hugely enjoyable, listenable album with songs on a range of topics from the personal to observations on life and the human condition.