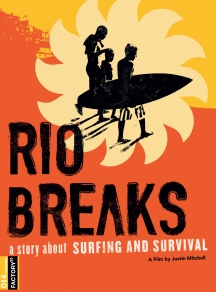 Set against the volatile and dangerous world of the favelas, Rio Breaks tells the story of two surf-obsessed friends, 13-year-old Fabio and 12-year-old Naamã. The pair live in Rio de Janeiro's Favela do Pavão, which is controlled by one of the city's most dangerous drug gangs. However, their attention is focused on the waves of Arpoador Beach and on a coming surfing event that may help them become professionals and escape the world of gangs. Nominated for Best Documentary at the Hawaii International Film Festival and winner of the Special Jury Mention at the San Sebastian Surfilm Festibal, this Sundance Channel co-production by Director Justin Mitchell (Death Cab for Cutie: Drive Well, Sleep Carefully, Jenny Lewis: Welcome to Van Nuys, Ted Leo: Dirty Old Town & Songs for Cassavetes) and Writer Vince Medeiros (Surfing & Huck Magazine) is an inspired and hugely original documentary that takes the surf film genre into never-before-seen territory.