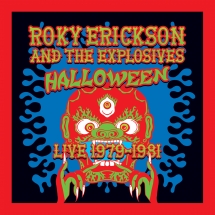 Special Colors for this 2 disc set! The Evil One Orange & Bloody Hammer Red colored vinyl. "Every Night Is Halloween". Upon completion of the Stu Cook produced Roky Erickson & The Aliens LP in summer of 1979, Roky decided to return home to Austin from San Francisco. He needed a band and The Explosives came highly recommended to Roky's manager, Craig Luckin. Introductions were made and rehearsals began. Roky & The Explosives immediately hit it off, musically and personally. They played together in Texas and California from 1979-1981 logging in around 50 shows. 13th Floor Elevators drummer John Ike Walton remarked to Explosives drummer Freddie Steady Krc "You guys played more shows with Roky than the Elevators did!" The guys got in the van and barnstormed all over the Lone Star State. Bootleg recordings began to emerge that were sub-quality live performance recordings that everyone was making money off except Roky and The Explosives. Craig and Freddie agreed Freddie would review all the recordings they could find from 1979-81. Almost all were in Craig's possession. Upon final review, Freddie would select the best performance of each song they were playing live from that time period. Some, like "Heroin" and "I've Just Seen a Face" were called on the spot by Roky at a show, performed once and never played again. After the music was selected, Craig and Freddie went through their personal collection of photos, poster images and added a complete show itinerary from 1979-81. Halloween is a loving collection of performances documenting a time of Roky's reemergence into the rock music world. It was something most thought they would never see after his final days with 13th Floor Elevators, following drug busts and his plunge into mental illness eventually ending in his stay at Rusk State Mental Hospital. This record is a testimony of Roky's personal strength and will to return to performing and songwriting. Long live his music!