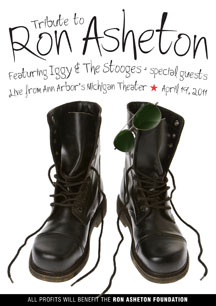 Recorded live at the Michigan Theater, this heartfelt tribute/celebration of Stooge guitarist Ron Asheton's life and music featured Iggy and the Stooges, Henry Rollins, and guest guitarist Deniz Tek (Radio Birdman). Includes a string section on a few Stooges classics! All profits from the sale of the DVD go to the Ron Asheton Foundation which supports animal welfare and music.

It was a typical night of Stooges-style brutality but in an even more passionate form, as the group and its guests took a wide swing through the repertoire, clearly moved by the sense of occasion and the cacophonous spirit of the 1,700 fans who snapped up tickets for the concert in less than an hour.