Rudij Bergmann - The Becoming of the Mannheim Ring 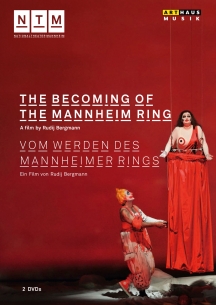 Wagner, Richard;’s Ring of the Nibelung, staged for the Wagner Anniversary Year 2013, brought the Mannheim National Theatre to the attention of the international music and theatre world. The production of director, stage designer, costume and lighting designer Achim Freyer and the congenial musical interpretation by Dan Ettinger delighted the public and the national press alike. Over the course of two years, fi lmmaker Bergmann, Rudij documented the work of those involved in this project, including the directorial team, soloists, choir, orchestra, extras and employees of all sections of the National Theatre. It is an exceptional, humorous and often closely lingering view of the events in the world of opera and its secrets.