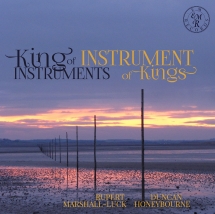 The use of the sobriquet 'King of Instruments' for the organ is well-known; and the violin was the instrument of the royal courts of Europe from the seventeenth century until after the Enlightenment. The chiasmus offered by the juxtaposition of these two instruments was thus irresistible as the title of a disc that features works for violin and organ or piano by three organist-composers: Herbert Sumsion, Harold Darke and Richard Pantcheff. Composed early in their respective careers, the sonatas for violin and piano by Sumsion (organist of Gloucester Cathedral from 1928 until 1967) and Darke (best-known for his setting of the carol 'In the bleak Midwinter') are full of zestful life and with a rich harmonic language that lends them depth and warmth. They are complemented on this recording by Richard Pantcheff's Sonata for Violin and Organ, composed in 2010, and which casts the two instruments as partners in a dialogue that is full of lyricism, passion and energy. Recorded in December 2014 in the Chapel of Jesus College, Cambridge, this disc highlights the Hudlestone Organ, built by the Swiss firm of Orgelbau Kuhn and installed in 2007.