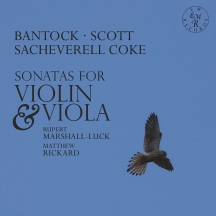 EMR CD018 features three vigorous, dramatic and colourful works by three unique, charismatic and colourful composers. Cyril Scott's Viola Sonata of 1953 is a highly focused work, meticulously crafted and tautly unified; and the fluency, inventiveness and iridescence of the writing makes the Sonata compelling listening. An equal magnetism surrounds Granville Bantock's Sonata no.3 in C major for Violin and Piano: composed at the end of its composer's life, in 1946, it eschews the complex grandiloquence of some of his earlier works in favour of a conciseness of form and simplicity of structure, yet Bantock's hallmarks of a richly appointed texture and sweeping melodic lines are still present. Roger Sacheverell Coke's Violin Sonata in D minor is perhaps the most emotionally involved of the three offerings on the disc. Composed during the Second World War, its first two movements alternate soaring melodic lines of searing beauty with dark, introverted musings; in the grim Scherzo, figures loom like nightmarish megoliths; and the fourth movement's anguished outpourings are an elegy for a generation. Rupert Marshall-Luck and Matthew Rickard have made several critically acclaimed recordings for EM Records and this disc is full of their signature commitment and energy.