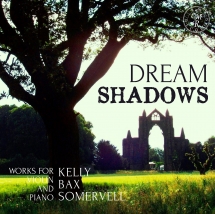 'Dream Shadows' features the World Première recording of Frederick Septimus Kelly's 'Gallipoli' Sonata for violin and piano. Kelly was born in 1881 in Australia and first came to the United Kingdom when he began his schooling at Eton College. Although a notable rower - he won a Gold Medal for Britain in the 1908 London Olympic Games - he was also a highly gifted composer. His Violin Sonata in G major was written for the violinist Jelly d'Aranyi and was composed in 1915 in Kelly's tent at Gallipoli, hence the work's appellation. Kelly wrote the Sonata not to express explicitly the horrors of war but rather to articulate his memories of the country in which he had spent his formative years and which had fostered his intellectual and creative development. In many respects it represents a farewell to a way of life; but it was also Kelly's own farewell to d'Aranyi. The composer was killed on the Somme in 1916 and d'Aranyi later affirmed that, on the night he died, she heard the Sonata being played as if from a great distance. This recording of the Gallipoli Sonata is, therefore, not only a fitting tribute to Kelly's memory, but is also a commemoration of all those whose gifts and talents have been wasted by war.