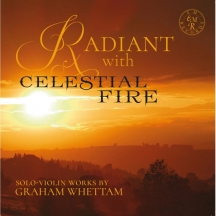 Violinist Rupert Marshall-Luck performs work by the little known composer, Graham Whettam. Graham Whettam (1927-2007) was a largely self-taught composer who occupies a place in the English symphonic tradition. His works include five symphonies - among them the 'Sinfonia Contra Timore' and the 'Promethean Symphony' - and a wealth of chamber works, including four string quartets, various trios and a series of works for solo instruments. Spanning a period of over 40 years, Whettam's works for solo violin are informed and directed by compositional rigour, technical assurance and an analytical musical grammar, but, at the same time, are full of vivid colour, dramatic inventiveness and, above all, a sense of deep humanity. Featuring the internationally-acclaimed violinist Rupert Marshall-Luck, whose solo performances have been frequently broadcast on BBC Radio 3, ABC Classic FM (Australia), RTÉ (Ireland), SABC (South Africa), Radio Suisse Romande (Switzerland), and in Canada, France, New Zealand and the USA, this new recording promises vital, committed and imaginative readings of these powerful and moving compositions.