Saxophonist Ryan Oliver finds himself backed by a 12 piece string orchestra & an all-star rhythm section that breaths life into his compositions. 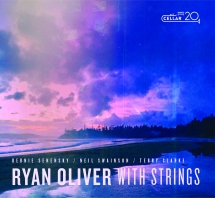 To say that this recording is a collaborative musical effort is an understatement. Mark Crawford's sophisticated and thoughtful arrangements elevated my original compositions to new heights; the incredibly talented 12-piece string orchestra breathed life into those ideas; and Terry Clarke, Neil Swainson and Bernie Senensky formed an incomparable rhythm section, lending a level of heavy-hitting artistry than can only come from a prolific career forged in the tradition of jazz music. The compositions represent almost cinematic snapshots of people, places and experiences that influenced my life and music, from the birth of my daughter, celebrated in the up-tempo triadic Blues for Josie Rose to the western landscape of the Cariboo where I grew up, captured in the haunting strings of The Ballad of Buffalo Bill. Hearing 16 musicians performing this music together, live off the floor, was a dream come true. Recorded at a time when the arts need more than ever to be nurtured and recognized as an important part of our world, to me this album represents the excitement of creativity and the power of collaboration

Oliver's improvisations have the formal character that defines many of his compositions. A muscular jazz improviser, Oliver always stays on point

He has a full-range horn, rich at the bottom and true at the top, acknowledging past masters like Trane and Dexter Gordon.

Canadian jazz is in good hands with players like Ryan Oliver