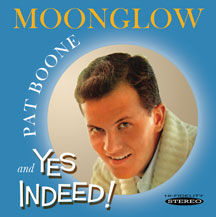 A great Pat Boone release featuring two of his best-selling LPs of standards. Pat Boone ranked second to Elvis Presley in the best-selling charts with 60 hits over a 15 year period, achieving among them 6 chart-toppers. Boone also placed albums in the American best sellers - 'Yes Indeed!' released in 1958 reached number 12 and 1960's 'Moonglow' got to number 26. Impressively none of these two albums contained any hit singles, only standards and many from the Great American Songbook. Issued in stereo and 'Moonglow' appears on CD in the UK for the first time.