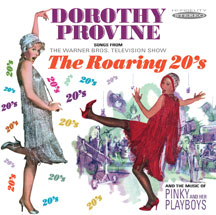 First time on CD, this is the sound track to the 1960-2 hit TV series, "The Roaring 20's" with the star of the show, Dorothy Provine, providing the vocals to the songs from the "Roaring 20's". "The Roaring 20s" is a hit TV series shown on the ABC network beginning in October 1960 and finishing in September 1962. The star of the show, Dorothy Provine plays Pinky Pinkham, the singer at the Charleston Club, who performs songs from the 1920s in almost every episode. Appearing first time on CD here are the two soundtrack LPs from this TV series featuring tunes from the "Roaring 20's" including the hit single "Don't Bring Lulu", remastered and in stereo.