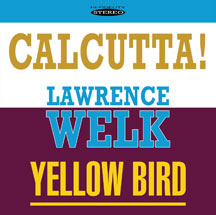 Two of Lawrence Welk's best-selling LPs, "Calcutta" and "Yellow Bird", re-mastered and re-issued on CD in stereo in their entirety for the very first time. "Calcutta" was the first million-seller for the famous Lawrence Welk Orchestra. It reached the coveted Number One spot in the U.S. charts in late 1960, remained a chart-topper for two weeks and was 17 weeks in the best-sellers. The album with the same name was also a big seller. For the first time, the "Calcutta" LP, along with another Lawrence Welk best-seller LP, "Yellow Bird", are issued on CD in their entirety plus two bonus tracks from singles. In total there are 26 instrumentals to appeal to those who like easy listening music and a bit of nostalgia.