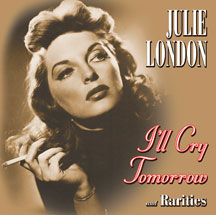 From Julie London, the smoky-voiced vocalist, a CD containing 24 tracks from her singles that have never appeared on any of her many LPs. One of the most distinctive pop singers of the 1950s, (between 1955 and 1957, Billboard proclaimed London the most popular female vocalist around) Julie London enjoyed a varied career that included releasing thirty-two albums and appearing on television and film. Her hit single of "Cry Me a River" remains the benchmark rendition of this much-covered song. In this tribute to London's varied singing career, Sepia Records presents twenty-four tracks from her single releases from the 1950s and early 1960s, including her earliest known recordings from 1955 - recordings that have almost disappeared between the cracks but show the expressive and technical range of this unique artist.