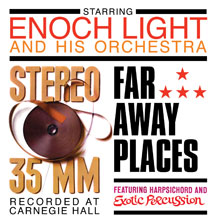 The first time on CD, for two best-selling albums from Enoch Light and his Orchestra. Featuring the chart-topping album "Stereo 35/MM" & "Far Away Places" digitally re- mastered. Enoch Light was conductor of his own orchestra who also produced a string of Best-Selling experimental stereo percussion albums in the 1960s. "Stereo 35/MM" was a chart-topping album in the USA Top Album chart in 1961 where it remained at No. 1 for 7 weeks. It was recorded on 35mm magnetic film and "live" at Carnegie Hall. "Far Away Places" features songs from "far way places" such as "Waltzing Matilda" and "Lisbon Antigua" taking the listener to foreign land via exotic percussion. Both LPs are appearing on CD for the very first time.